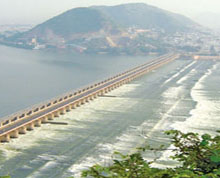 Bounded by the Budameru River on the north and Indrakilacchi hills on the west the scenic city of Vijayawada in Andhra Pradesh translates into City of Victory.

Legend has it that it was at this place that Lord Shiva had given Arjuna , one of the Pandava brothers of the Mahabharata fame his prized weapon ‘Pasupathava.

The place is also associated with Goddesses Durga who is said to have taken rest here after slaying the demon Mahishasur in a violent fight. Vijayawada is also famous for mangoes.

The nearby village of Kondapalli is famous for producing light weight toys.

You can choose Vijayawada as a convenient base for exploring some charming old Buddhist sites in the lush and green surrounding area. 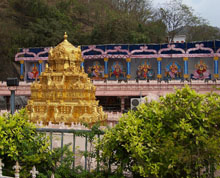 During the Durga Puja Festival, thousands of devotees congregate at the shrine after taking a holy dip in the Krishna River adjacent to the temple.

43km west of Vijayawada Amaravathi is a famous archeological site. A great centre of Buddhism Amaravathi is home to the biggest stupa of India.

Built in the 3rd century BC during the Ashokan period, the stupa in its final form was completed in 200 AD. The carved panels (Some of which can be seen in the British Museum in London) portray the scenes from the life of the Buddha.

The stupa is surrounded by free standing Buddha figures. These panels are among the greatest works of ancient Indian art.

Located on Mahatma Gandhi Road, the Victoria Jubilee Museum was built in 1887 to mark the golden jubilee celebrations of Queen Victoria. A fine example of the Indo-European style of architecture, the museum is a repository of archeological finds including figure of standing Buddha.

A day in the scenic surroundings of Prakasam Barrage, built across the Krishna River, will soothe your senses. The scenic reservoir and the canals will offer visitors a memorable experience.

Six kilometers from Vijayawada, the 2nd century Undavalli cave temple is located in the Guntur district. The four storey cave was converted into Hindu temple the third level of which houses a huge monolith of the Lord Anantha Padmanabha Swamy in reclining posture. You can reach here by buses which ply from Vijayawada bus station at regular intervals.

A picturesque island on the Krishna River, Bhavani Island is a famous attraction of Vijayawada. It attracts picnickers, holiday-makers and tourists. The 133-acre Bhavani island is home to cottages and offers fun-filled adventure sports. Visitors can reach the island by boat 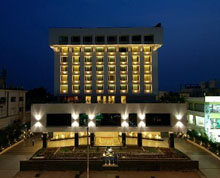 The Gateway Hotel in Vijayawada

Where to stay in Vijayawada

Being an important centre of commerce, Vijayawada has a wide array of accommodation options to choose from to suit all budgets.

Most of the budget hotels in Vijawada are ideally located near the near the Railway Station and the Old Bus stand.

How to reach Vijayawada

How to Reach Vijayawada by Air: the Airport at Gannavaram is 20 km away from the city centre. Regular flights connect Vijayawada to Hyderabad and Visakhapatnam.

How to Reach Vijayawada By Rail: The Vijayawada railway station is directly connected with different cites of India.

How to Reach Vijayawada by Road: Vijayawada is easily approachable by regular buses, taxis, coaches and tourist cabs from different places in Andhra Pradesh. Some of the cities and places connected with Vijayawada by road are Srisailam (248km), Hyderabad (280 km), Tirupati (385 km), Visakhapatnam (283 km) Bhubaneswar (792km).