This 'land of gems' (Manipur) is located at the extreme northeast part of India with Imphal as state capital.

However, Manipur has other popular names like Kangleipak, Meeteileipak or Sanaleibak which are in vogue even today among locals. The neighbouring regions call Manipur by different names on account of historical reasons.

Known for deep jungles and mountains, the state is bounded by Nagaland to the north, Mizoram to the south, and Assam to the west. While Myanmar lies to its east. Manipur covers an area of 22,327 sq. km with a total population of 2.5 million.

Some of the prominent ethnic people are the Meitei, Kuki, Naga and Pangal who speak different types of Sino-Tibetan languages. The hill state has been most affected by the World War-II and felt a number of economic and social changes due to far reaching developments in Southeast Asia for over 2,500 years. 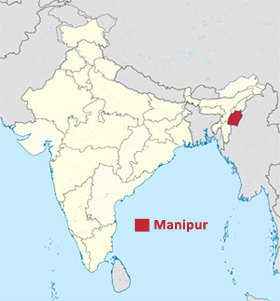 In fact, Manipur is the gateway to Southeast Asia from the Indian mainland enabling the migration of people, cultures and religions.

Manipuris bore the brunt of Japanese invasion during World War-II from Myanmar (then Burma).

During the British Raj, the kingdom of Manipur was one of the princely states and had deep cultural association with Myanmar. There are many similarities between the people of Manipur and Myanmar as they share almost the same lifestyle hailing from the same Tibetan-Burman race. Between 1917 and 1939, the people of Manipur rose in revolt against the British rule with a series of violent protests in this landlocked kingdom.

By the late 1930s, the princely state of Manipur negotiated with the British administration its preference to be part of India, rather than Burma. These negotiations were cut short with the outbreak of World War II.

On 21 September 1949, Maharaja Budhachandra signed a Treaty of Accession merging the kingdom into India. However, the merger agreement is now being disputed by various ethnic and militant groups in Manipur as having been completed without consensus of the locals and under duress. 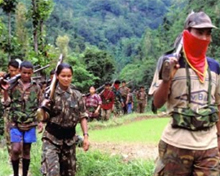 The serious issue of merger with India and differing visions for the future has resulted in a 50-year insurgency in the state for independence from India. In recent years, the mushroom of different sectarian and militant groups has put a question mark over the status of Manipur as part of Indian union.

But at the same time, a stable government is being elected by the people in a free and democratic manner with Manipuris given full autonomy to elect their representatives in the governance.

The majority of ethnic groups want to remain with India despite violence unleashed by more than a dozen militant groups in Manipur. During 2010-2013, the militant insurgency was responsible for the violent death of about 1 civilian per 100,000 people each year. The world's average annual death rate from intentional violence has been 7.9 per 100,000 people.

About two-thirds of the people are Meitei (aka Meetei), who occupy the Manipur valley and are largely Hindus. Meitei women conduct most of the trade in the valley and enjoy high social status.

The indigenous hill tribes, such as the Nagas in the north and the Kukis in the south, make up the rest of the population. The language of the Meetei people, Meitei (or Manipuri) is the lingua franca in Manipur. 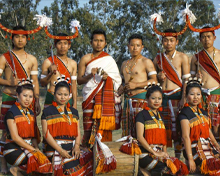 It may be noted that the indigenous tribal people constitute 30% of the state population.

The ethnic tribals are distinguished by dialects and culture that are village-based with their own set of customs and social practices.

Manipuris are divided into numerous clans and sections. The people of these tribes speak languages of the Tibeto-Burman family and practice traditional animist religions. The diverse ethnic groups practice a variety of religions including Christianity.

Manipur has primarily an agrarian economy with significant potential for hydroelectric power generation. It is connected to the neighbouring states by daily flights at Imphal airport, the second largest airport in north-eastern India.

Manipur is credited with introducing the equestrian sport polo to Europeans.