Utmost importance is given to the maintenance of roads as they bring tourists and other visitors including Trafficmen to Shimla.

For the hilly state depends heavily on tourism revenue and further woos investors to set up their units in the state.

The seasonal landslides, blizzards, snowfall and rain-induced trenches and tree falls are common in Shimla and other cities.

Heavy rains create traffic hazards which instil a sense of fear among tourists and residents alike.

With the explosion of vehicles entering Shimla whose roads don't have capacity to accommodate the surge in motorists, the state has taken measures to regulate the traffic flow.

Shimla administration has decided to allow vehicles on the single-side parking on the Circular Road.

More cranes were pressed into service to lift the wrongly-parked vehicles.

While heavy vehicles like trucks and containers would be diverted through the Shoghi bypass, light goods vehicles would be allowed in limited numbers inside the city.

The dumping of construction materials on the roadside is banned and strict action is being taken against defaulters in Shimla.

The main roads in Shimla witness heavy traffic in the morning and evening hours.

In order to ease the traffic flow, the schools along the Circular Road were told to have shift timings.

The existing bus terminus at Lakkar Bazaar is being shifted to Dhalli.

A lax enforcement in checking traffic violations has emboldened many vehicles owners to not only disobey the law but they also pose a serious risk to the pedestrians on the narrow roads in Shimla. 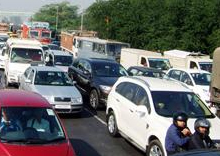 It seems as if the traffic police are turning a blind eye to the plight of walkers on the footpath who have to face mounting problems due to irregular parking and violations by motorists.

Traffic violations are more blatant in areas like Sanjauli, IGMC road, Bustand, Kasumpti and other areas of the town.

Despite the presence of signage and warning posts on busy roads that explain traffic norms and the penalties for violations, the motorists are not deterred by such posts which only reflects the poor state of traffic management in the Himachal capital.

Over speeding, disobeying traffic signals and haphazard parking are the most worrisome aspects on Shimla roads.

The Circular or Cart Road is the main thoroughfare in Shimla.

The CM has announced in the Budget 2015-16 that this road will be widened by PWD to ensure that two buses can cross at a time.

As rapid urbanisation is posing parking woes, the government has decided to increase the parking facilities both through PPP mode as well as through state funding.

The urban local bodies, which want to develop parking lots (and facilities), would be supported by the state government by providing 50% of the project cost.

A budget provision of Rs 15 crore was made to set up parking facilities in the districts of Himachal.

To improve the transport facilities in and around Shimla town, the state government has sent a project proposal of Rs 1,200 crore to the Centre for funding through World Bank.

State government is keen to provide safe, reliable and comfortable travelling facility to the public. 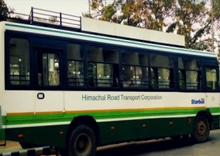 As part of this objective, 510 new buses have already been purchased by HRTC and 800 more new buses are being purchased under JNNURM.

There is a strong need for the construction of new bus stands and upgrade the existing ones in the state.

Public toilets will be constructed at every bus stand for the benefit of commuters.

In order to improve the financial health of HRTC, a budget support of Rs 200 crore (as both grant and equity) was proposed in 2015-16.

To deal with traffic related cases which are on the rise, the government will be setting up 6 mobile traffic magistrates in the state to book road violators as they now go scot-free without any punishment.

Most residents blame the poor enforcement of traffic norms by police for the increasing violations by motorists on Shimla roads which are being stretched beyond capacity.

On any given day, Shimla sees the presence of nearly one lakh vehicles and more during weekends and tourist season.

The 20 parking lots auctioned by the municipal corporation can accommodate only 523 vehicles. While the 6 roadside parking sites have a capacity of 188.

The space for walking, once a favourite activity, is dwindling rapidly. 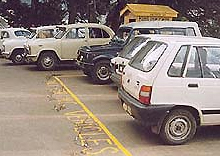 Coming to the rescue of hapless pedestrians, the Himachal Pradesh high has imposed restrictions on any government policy to regularise illegal constructions in the state.

Moreover, all vehicles being registered in Shimla must have a parking space without which they can't play on the roads.

The vehicle owner at the time of registration will have to produce a certificate issued by the Shimla Collector on the parking space allotted for the vehicle.

A SHO (station house officer) will recommend to the Collector based on the physical verification of the allotted space for parking.

The court ruling is expected to make it mandatory for house owners to ensure parking space in the construction plan.

With the intervention of the judiciary, the residents are hopeful the new directive will decongest the traffic on Shimla and end its parking woes.