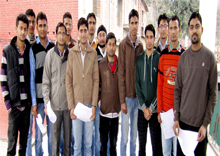 Creating jobs for social and economic development of the youth has been given foremost importance by the Himachal government.

While the educated and skilled youth are getting absorbed in the local industries, a need-based training is being given to those people who are shifting from agriculture to other sources of livelihood.

The chief minister has instructed all the departments to formulate sector specific policies with an aim to create job opportunities and develop the entrepreneurial capacity of the youth.

Himachal Pradesh has empanelled a list of quality skill providers for imparting need based and certified skills to the youth who are then moulded to the requirements of industries.

A break-up of the labour market in the state will show that majority of the people are involved in agriculture which is the backbone of this hill state.

As per the latest estimates, 30.05% of the total population of the state is classified as main workers; 21.81% marginal workers and the rest 48.15% as non-workers.

The employment related guidance and information services to job seekers are rendered through a plethora of organisations in the state. They are:

All the 67 employment exchanges in Himachal have been computerised and except for three of these centres, the rest (64 units) offer online services.

A total of 331 placements were done in the government sector and 2,829 in the private sector by the exchanges during this period (April-December 2014).

The number of vacancies notified during the period by various employers was 3,357.

The consolidated number on live registers of all employment exchanges stood at 9,91,033 on 31 December 2014.

The state has constituted a Minimum Wages Advisory Board for the purpose of fixing and revising the minimum rates of wages for all categories of workers.

Following the advice of the board, the government has enhanced the minimum wages for unskilled category of workers from Rs 4,500 per month to Rs 5,100 per month from April 2014.

Similarly, a proportional increase has also given to the othercategories of workers like semi-skilled and highly-skilled in the state.

At the district level, the employment data is being collected under the Employment Market Information programme since 1960.

With a view to provide technical and highly skilled manpower to all the industrial units, institutions and establishments, the Central Employment Cell has been set up in the Directorate of Labour and Employment.

Under this scheme, timely guidance is provided to job seekers for placement in the private sector according to their qualifications.

Moreover, the placement cell is focused on recruiting the skilled workers without delay and avoiding needless wastage of money and material.

A total of 1,108 candidates of various trades of skilled nature were sponsored in different industrial units in the private sector in Himachal Pradesh.

During the same period, 9 job fairs were held wherein 2,484 candidates were employed in different industries in the state.

The labour conciliation machinery has been functioning in the state and has proved as an important agency for the settlement of industrial disputes and maintaining harmony at factories.

For looking into the problems of the workers (labourers) and management of hydel projects,the state government has constituted tripartite committees in each district under the chairmanship of deputycommissioner.

Further, the workers committees having representative of employers and employees have been constituted in industries having more than one hundred workers in a single unit.

This is a flagship programme of Himachal Pradesh in the labour sector.

A budgetary provision of Rs 100 crore was made for the Skill DevelopmentAllowance scheme in 2014-15.

Its purpose is to aid the educated unemployed youth to enhance theiremployability and income through skill development.

The innovative scheme offers an allowance Rs 1,000 per month foryouth doing skill training and Rs 1,500 per month for 50% permanentlyphysically disabled for duration of training subject to maximum 2 years.

In a far-sighted move, the state government has decided to set up a website based complete digital database of youth who are getting skill training in various sectors.

This web-based module will help track the employment growth of youth who were products of skill training centres.

These centres will link up with polytechnics to create job opportunities for students.