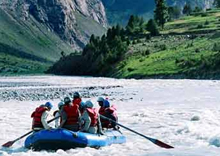 Situated in North India, Himachal Pradesh (Abode of Snow) is surrounded by Jammu & Kashmir on the north; Punjab, Haryana, Uttar Pradesh to the south.

The state is mostly covered by the low Shivalik hill range towards the south and the dramatically high trans-Himalayan ranges as you go north.

This can be described as one of the most beautiful places to visit in India. With its chilled climate and beautiful locales it can be described a trekkers paradise. The climate of the state ranges from cool to snow laden depending on location and geography. Its one of those few places in the world that still has large parts of land untouched by commercialization and have been preserved in its earthly splendour.

Some of the key spots where you can under take excavations are places like Shimla, Kulu, Manali, and Leh. Shimla is the capital city of Himachal which is a beautiful and serene hill station.

The Kullu valley can be a fascinating trekking expedition , with lush green forests and Beas River running through it. In Kullu you have a famous temple called the Raghunath Temple famous for its history and carvings. From Manali, the trip along the spectacular mountain road to Leh via Rohtang, Keylong, Pang is sure to take your breath away and the route is across the second highest vehicular pass in the world at a height over 5500 m. 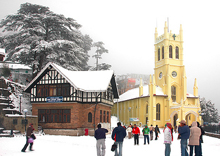 The name for this hill station has been derived from Godess Shyamala wich known to be an incarnation of Goddess Kali. Shimla is a tranquil place with a wonderful climate. It is the only urbanized city of the state and has many luxurious villas and other accommodation facilities to suit various budgets and the preferences of travelers.

There are number of temples, parks, and valleys to tour here apart from trekking trips. It is known as "Destination for all seasons". Christ Church is one of the oldest churches in the state and is a famous landmark in Shimla. Himachal State Museum & Library has a good collection of ancient historical sculptures, Kufri is a popular trekking spot for avid trekkers. 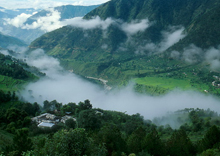 The town of Kullu draws thousands of visitors every year in view its unspolit earthy beauty. It can be a paradise for couples especially who choose this place for their honey moon.

Though Kullu in its sense a small town it has a lot of life and the people here are very lively and friendly. Temples, apple orchards, gardens, and the festivals make it a worthwhile place of visit as well. Take a tour of the handicraft textile in the region making shawls, caps, and other woolen accessories. Dushera is celebrated infull spirit at Kullu

This place over the years has developed symbolic importance for Bhuddhist followers and is a well visited place in Himachal Pradesh. Built in the backdrop of the Dhauladhar ranges, his holiness the Dalai Lama has taken up refuge in Dharamshala after leaving Tibet.

Little Lhasa is the place that the world knows today as the residence of the Dalai Lama. You can also make plans to visit the Kangra Valley along with Dharamshala. In Kangra Valley, there were 80 hill resorts constructed in the 17th century.

This is located in the Kullu Valley and can be found at the foothills of the Himalayan Ranges. Not very far from Manali you have the Rohtang Pass which is a must visit for all nature lovers.

The place boasts of incredible greenery with dew soaked leaves. It takes another dimension during the winter when it snows where the peaks with covers of snow and chunks of glaciers that can be found in the streams along with the dry trees which all appeal so vividly to the human eye. 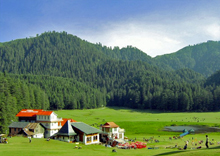 This is very popular place in Himachal that developed a lot of historical significance over many years.

Surrounded by the majestic Shivalik Ranges in the small hamlet of Chamba, it is known for the many famous temples of Lord Shiva that have been visited for centuries. The architectural style is bound to leave a deep impact on the visiting travelers.