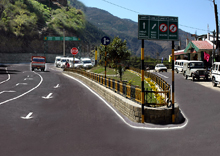 The hilly terrain, valleys and river streams are major hurdles in creating an efficient road network in Himachal Pradesh which lies on the western Himalayas.

Roads are an essential ingredient of the state infrastructure which is prerequisite for industrial growth.

In the absence of any other suitable and viable modes of transportation like railways and waterways, roads play a vital role in boosting the economy of the hilly state like Himachal Pradesh.

Starting almost from a scratch, the state government has constructed 35,356 km of motor able roads inclusive of 'jeep-able' track till December, 2014.

Considering the importance of roads in Himachal, the state has accorded top most priority to expand this network in the coming years.

However, it should be noted that the geography of Himachal is presenting a considerable challenge to the development of road infrastructure in the state.

Although Himachal has three airports and two narrow gauge rail tracks, roads remain the main mode of transport in Himachal.

The state government attaches utmost importance to the upgradation of national highways having a total length of 1,783.69 km including urban roads and bypasses.

There are eight NHs in total connecting major cities of Himachal. For tourists and pilgrims, these are only the routes to reach their destinations and return safely.

The state has some of the longest road tunnels in the country, namely the 3km-long Aut tunnel in Mandi on NH-21 and the under construction 8.8km Rohtang tunnel which will create an all-weather link between Manali and Lahaul valley.

At present, Lahaul village close to Tibet remains cut-off from rest of the country for nearly 8-month in a year for want of road connectivity. 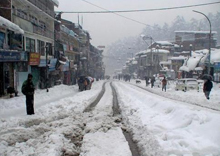 In addition to the NHs, the state has a large network of highways and village roads.

Most tourist spots such as Shimla, Manali, Kullu and Dharamsala are well connected by roads.

Some of the roads in Himachal are of seasonal in nature. That is, they are closed for traffic during winters and monsoons due to heavy snowfall, landslides and washouts.

The Manali-Leh road remains closed for most part of the winter.

The World Bank has approved a loan of $220 million in 2007 to speed up all the pending road networks in Himachal without further delay.

The government-owned Himachal Road Transport Corporation (HRTC) runs an efficient network of buses interstate and across the state.

Its fleet of buses offer all-weather access to the remotest of the corners of the state.

Himachal Pradesh being a major tourist destination, there is no dearth of private buses and taxis.

In spite of the state being hilly, Hamirpur district has got highest road density in the country.

Road transport is the main stay of economic activity in Himachal as other means of transport namely railways and airways are negligible.

Therefore, the role of HRTC assumes critical importance. The HRTC wasformed under RTC Act, 1950 to provide efficient, adequate and safe transport facility to the people as other modes of transport are negligible in the State.

The private buses, taxis and auto rickshaws do operate their services, but their network reach and fleet capacity is very negligible.

The revenue of the corporation is expected to increase by Rs 84 crore during 2014-15.

The passenger transport services to the people of Himachal within and outside the state are being provided by the HRTC with a fleet strength of 2,292 buses as on December, 2014. 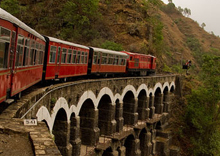 Being a hill state, Himachal has only two narrow-gauge rail tracks.

The Kalka-Shimla Railway track has a length of 96 km. It passes through 102 tunnels and crosses 864 bridges.

The track has been in existence for over a century now. The scenic Kalka-Shimla Railway is known to be an engineering marvel of British India.

The level of difficulty in laying of tracks could be judged by a journey in the route.

The other narrow gauge rail route in the state is the Kangra Valley Railway.

Bilaspur-Mandi-Leh Railway is a proposed railway project in Himachal which will be the longest railway track in the state.

Once completed, the Bilaspur-Leh rail is expected to become the highest railway track in the world.

The Pathankot-Jogindernagar track has a route length of about 113 km.

This line is proposed to be converted to broad gauge and further linked to Bilaspur-Mandi line at Mandi.

Both these tracks are commercially unviable but are operated because of their heritage value.

A broad gauge line exists which connects Nangal Dam in Punjab to Una.

Currently this line is being extended till Talwara (Punjab) with track operational till Churu takarla.

Una is connected to New Delhi by Jan Shatabdi express and Himachal Express. 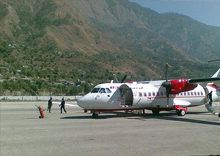 The flights operate only seasonally due to extreme weather conditions, especially during winters.

All these airports have runways shorter than 4,000 feet and therefore allow the operation of only the smaller aircraft such as the 18-seater Dornier and 42-seater ATR, which is the most common aircraft operating on these runways.