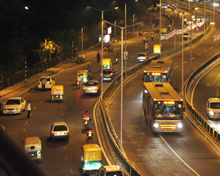 Gujarat is the seventh largest state in India with a total land area of 1.96 lakh sq. km and shares international borders with Sindh district of Pakistan in the northwest.

It has a 1,600 km-long coastline off Arabian Sea and is flanked by Maharashtra (south), Rajasthan (north), and Madhya Pradesh (east) forming the larger western zone of the Indian subcontinent.

Gujarat is the seventh largest state in India with a total land area of 1.96 lakh sq. km and shares international borders with Sindh district of Pakistan in the northwest.

It has a 1,600 km-long coastline off Arabian Sea and is flanked by Maharashtra (south), Rajasthan (north), and Madhya Pradesh (east) forming the larger western zone of the Indian subcontinent.

The prosperous state of 6.5 crore Gujaratis is known all over the world for its entrepreneurship and hardworking people who had excelled in their trade for centuries.

Known for its efficient mode of transport services, the state capital Gandhinagar as well as Ahmedabad, the commercial hub, have a well-run GSRTC buses catering to the myriad requirements of citizens.

In urban centres, autorickhaws, taxi cabs and private buses are quite common reaching out to niche segments that depend on such modes of transport for various needs.

Set up in 1960, the Gujarat State Road Transport Corporation (GSRTC) is a government-owned service provider offering round-the-clock transportation to major cities and towns of the state. 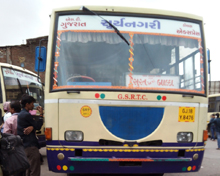 The state-owned bus service began its operations on 1 May, 1960 - the formation day of Gujarat state - with just 7 divisions, 76 depots and 7 divisional workshops catering to 1,767 buses then.

Over the decades, the state PSU has emerged the top provider of bus transport with 16 divisions, 126 depots, 226 bus stations, 1,554 pickup stands and 8,000 vehicles that fulfil the commuting needs of the public including traders and businessmen.

The public undertaking is covering 98% of the villages and 99% population of Gujarat in addition to plying to major cities of the country (in long distance routes).

In fact, the transformation of Gujarat as an economic success story is partly due to an effective mode of road transport being offered by GSRTC at affordable rates.

This remarkable growth is the result of tireless efforts of more than 50,000 workforce of GSRTC, efficient management and fiscal support from the state government.

The Volvo fleet extends a range of comforts for passengers travelling long distances.

GSRTC is the first in country to introduce GPS/GIS-based bus tracking and monitoring system in luxury buses.

Internet based reservation system for passengers and e-ticketing for the public have further made GSRTC services popular among the people.

There are various travel agents and web portals for booking tickets at GSRTC buses which ply to major cities and busy towns of India.

Bus ticket booking for GSRTC can be made either from its specified counters or by going online.

With the goal of providing "More Buses, Good Buses" to traveling public, GSRTC has inducted 12,793 new buses in the last eight years at the cost of Rs 1,906.46 crore with the help of Government loan.

The portal www.gsrtc.in has bus time-tables, route services and type of facilities being extended to commuters in its long-range services.

Passengers can book tickets at this website, send SMS for blocking seats in the specific bus service without having to reach the ticket counter for reservation. 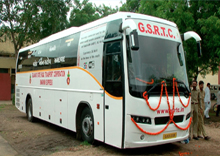 In future, the corporation will be integrating all its depots for maintenance and tracking system.

The GPS-enable tracking system available in luxury services will gradually be extended to all its buses across categories.

The fleet management through a network of computers is being envisaged with a public information system updating the status of bus services.

GSRTC is also toying with the idea of introducing public entertainment system at major stations and in bus services, notably in long distance routes.

The Road and Buildings Department (RBD) of state government is responsible for construction and maintenance of roads including state highways and panchayat roads in Gujarat.

This department is operating through 6 wings spread across the state in 26 districts.

The state highways are arterial routes linking district headquarters and important towns within the capital and important cities.

Besides, the state highways also connect the districts with national highways of the neighbouring states. 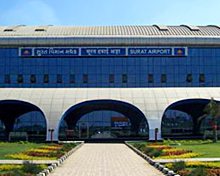 Gujarat has 17 airports in all. The Sardar Vallabhbhai Patel International Airport in Ahmedabad is only such facility for global travellers to visit this westernmost state by air.

The Gujarat Civil Aviation Board (GUJCAB) headed by Chief Minister aims to speed up air infrastructure in the state.

Other minor airports owned by the AAI are in Surat, Bhavnagar, Deesna, Kandla, Keshod, Porbandar, Rajkot and Harni. 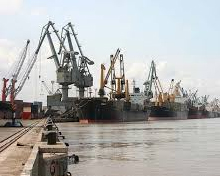 Gujarat state has the longest coastline of 1,600 km in India overlooking the Arabian Sea on the western front.

Kandla Port is one of the largest ports facilitating the export of merchandise and extending berthing services to carriers and ships.

Other ports in Gujarat are in Navlakhi, Magdalla, Pipavav, Porbandar, Veraval and the privately owned Mundra Port.