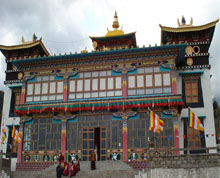 Buddhist monasteries (Tawang Monastery) and archeological sites (Malinithan and Itanagar) dating back centuries are more than just a ruin for traveler to get their photo taken in front of: they are as relevant in daily life as ever.

Arunachal Pradesh holds a large and varied flora and fauna populations. The state is home to orchids, known for their exquisitely beautiful blooms.