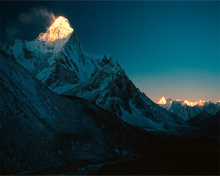 In proportion to the altitude, the weather of Arunachal Pradesh differs though overall it has a pleasant and temperate climate.

The high altitude areas near the Himalayas observe tundra (or alpine) climate, while those at lesser elevation enjoy a temperate weather.

The sea-level areas bordering Assam experience sub-tropical climate. The climate of Arunachal is governed by the Himalayan system and the altitudinal differences. It is situated in the Eastern Himalayan province.

The entire territory forms a complex hill system with varying elevations ranging from 50m in the foot-hills and gradually ascending to about 7,000m, traversed throughout by a number of rivers and rivulets.

In the Upper Himalayas, where elevation is really high, alpine or tundra type of weather is experienced while temperate climate is enjoyed in the middle Himalayas.

However, in areas at sea level base and far removed from the Himalayan range, people find the climate to be humid and sub-tropical. These plains have warm summers and pleasant winters. It receives heavy showers of about 200-400 cm between the months of May and September.

The summer season begins in March and extends till August in the plains. Between June and August the temperature sometimes goes up to 40 to 42 degree Celsius.

Winters officially arrive in November and prevail till the month of February. The high altitude regions become very cold during winters.

The north-eastern state shares its borders with only two Indian states - Assam in the south and Nagaland in the south-east. As regards other countries, Myanmar lies to its east, Bhutan to its west, and Tibet to its north.

The extended Himalayan ranges in the eastern part separates the state from China. Further, the ranges widen near Nagaland, and form a frontier among India and Burma in Changlang and Tirap district.

Its topography is well-defined by mountain ranges and sub-mountainous terrains, beside the northern parts. Rivers, like Brahmaputra, Kameng, Siang, Lohit, Subansiri, Tirap, etc. flow through its expanse, and provide fresh waters to the dwellers.

The extreme variation of climate within Arunachal has been more a blessing than disadvantage because the micro level agro climatic conditions are congenial for growth of diverse crops that suit the different climatic requirement in the same season in different agro-ecological zones.

Heterogeneous climate and soil conditions of the state are an advantage. There is a vast area suitable for temperate fruits of both high and low chilling requirements. But the major areas of the state are fit for tropical and subtropical fruits.

Apple is a major fruit of temperate areas which is a unique aspect of Arunachal among the north eastern states. On the other hand, mandarin, sweet orange and pineapple among others grow abundantly in the mid and foothill areas.

The outstanding strength of the state is that its varied agro ecological zones and the farming system approach (FSA) supports growth of a large variety of crops in every season.

Arunachal Pradesh being a hilly state with deep valleys and high mountain peaks traversed by number of rivers and rivulets, has varying agro-climatic zones which can broadly be classified as: