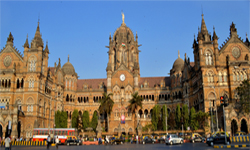 One of the most compelling cities in the world, Mumbai brims with interesting attractions. The city is noteworthy for its colonial architecture and heritage buildings including the Gateway of India and Chhatrapati Shivaji Terminus.

Many wistful songs have been penned about Mumbai (formerly Bombay), the capital of Maharashtra and the economic powerhouse of India.

Anytime is a good time to holiday in Mumbai, although the nominal winter months between November and February are the best time to travel to Mumbai. It's no surprise that so many wistful songs have been penned about Mumbai (formerly Bombay), the capital of Maharashtra and the economic powerhouse of India.

Places of Interest in Mumbai

Commenced in 1871 and completed in 1878 at a cost of Rs.16.5 lakhs, the High Court is one of the largest Neo-Gothic buildings in the city, second only to the Victoria Terminus (Chhatrapati Shivaji Terminus). This enormous edifice is 562 feet in length, the breadth is 187 feet and the height to the eaves 90 feet. The Courts were designed by Lt. Col. J.A. Fuller and were completed in 1878.

The High Court complex today consists of the main High Court Building, the annexe block, the PWD Building together with its annexe along with a few smaller ancillary structures.

The circular garden and the buildings around this Circle were constructed in the 1860s after the demolition of the Fort walls, under orders of Sir Bartle Frere. The laying out of the garden, covering an area of 12,081 square yards, was commenced in 1869 and completed in 1872. The circle was originally named Elphinstone Circle, after Lord Elphinstone, who contributed in many ways to the development of Bombay. Following independence in 1947, Elphinstone Circle was renamed after Benjamin Guy Horniman, a former editor of the Bombay Chronicle, who was an active participant in India’s freedom movement.

Named after the Roman Goddess Flora, Flora Fountain, designed by R. Norman Shaw was originally meant to be placed in the Victoria Gardens (Jijamata Udyan) in Byculla. The Fountain was placed in 1869 at its present location to honour Sir Bartle Frere, the Governor of Mumbai. 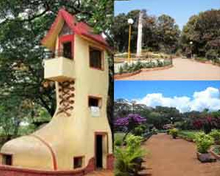 Dedicated to Lord Adinath, the first Tirthankar of Jainism, the Jain Temple at Walkeshwar was built in marble in 1905. The walls of the shrines are embellished with colourful paintings depicting various incidents in the lives of the 24 Tirthankaras (ford makers) of Jainism. A shrine dedicated to Parsvanath, the twenty third Tirthankars, houses his statue carved out of black marble.

Named after the wife of India's first Prime Minister Jawaharlal Nehru, Kamala Nehru Park was created in 1952 on the slopes of Malabar Hill. The garden offers a beautiful view of Chowpatty Beach and Marine Drive.

Dedicated to the goddess of wealth, Mahalaxmi Temple is one of the landmarks of Mumbai. This important Hindu shrine is located on the Bhulabhai Desai Road.

Situated opposite Regal Cinema at the junction of Chhatrapati Shivaji Marg and Colaba Causeway, this is one of the oldest buildings of the area. Originally, the sprawling Royal Alfred Sailors’ Home, it functioned in later years as the Bombay Presidency Council Hall and is now the Maharashtra State Police Headquarters.

The posh locale of Mumbai, Malabar Hill, a hillock in southern Mumbai, has attractive residences including the Chief Minister's residence and Sahyadri - the palatial state guest house.

Mani Bhavan or The Gandhi Museum

Mani Bhavan, residence of Mahatma Gandhi, where he used to stay from time to time, is now dedicated as a memorial to the Father of the Nation.

This V-shaped building near the Victoria Terminus (Now Chhatrapati Shivaji Terminus) is the headquarters of BMC - Brinhanmumbai Municipal Corporation. The building is designed in the early gothic style blended with Indian motifs. The foundation stone was laid in December 1884, by the then Viceroy, Lord Ripon and the building was completed in 1893. The tower of the building rises to a height of 235 feet and is surmounted by a dome. At the entrance stands an imposing bronze statue of Sir Pherozeshah Mehta, the ‘Lion of Bombay’.

Situated on Dr. Annie Besant Road, Worli in Mumbai, the Nehru centre houses a permanent exposition "Discovery of India". It is a communication museum enabling visitors to discover India following the spirit of Jawaharlal Nehru, the first Prime Minister of India. The high-rise corncob of the cylindrical Nehru Centre houses a planetarium, concert-movie auditorium and convention. 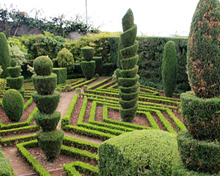 It is one of the oldest surviving historic buildings in the city. The Collector’s Office and the Land Records Registry are located in this large stone building, originally constructed as barracks for the Portuguese garrison and taken over by the East Indian Company in 1665, when the islands were ceded to England.

Popularly known as Hanging Gardens Pherozshah Mehta Gardens were laid out in 1881 Ulhas Ghapokar over on top of a reservoir, supplying water to Mumbai.

A unique feature of these terraced gardens are the hedges which are carved into the shapes of animals and a flower clock.

Located adjacent to the Horniman Circle, St. Thomas’ Cathedral is the oldest Anglican Church in Mumbai. It became functional from the day of Christmas in 1718. This is the Church after which the Church Gate to the Fort has been named.

Located on the Netaji Subhash Road, Taraporewala Aquarium has specimens of moth marine and freshwater fish. It was opened in 1951. What is unique about the aquarium is the fact that a pipeline brings sea water directly from the sea for the marine life.

Designed by Colonel Thomas Cowper of Bombay Engineers, the Town Hall became the city center for civic debate and important civic and political discussions. The neo-classical building also played a significant role in the educational, cultural and social life of the city. Since its construction, it has served as the headquarters of the Asiatic Society of Bombay, founded in 1804 as the Literary Society, which was amalgamated with the Royal Asiatic Society of Great Britain in 1829.

Formerly known as Victoria Gardens, these are beautifully laid out gardens in the busy heartland of the city. Situated on Ambedkar Road in Byculla (East), Veermata Jijabai Bhonsle Udyan also contains the Mumbai Zoo which is home several rare and endangered species of fauna. 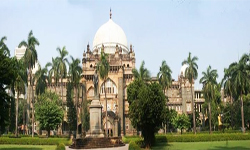 Tradition has it that Lord Ram on his way to rescue his wife, Sita, kidnapped by demon king Ravana, stopped at the spot and created a lingam out of sand to pay his obeisance to Lord Shiva. Hence the name Walu-ka-Ishwar (god of sand) or Walkeshwar. Adjacent to the Shiva shrine is the sacred Banganga Tank, the steps of which were built during the reign of the Silhara Dynasty (810 – 1240 AD). The place hosts Banganga Music Festival every year in the month of January.

Earlier known as the Prince of Wales Museum, Chhatrapati Shivaji Maharaj Vastu Sanghralaya is a fine specimen of the Indo-saracenic style. The imposing dome of the building is a feast for the eyes. This world-class museum has its collection of the antiquities with more than 50,000 artifacts and relics of ancient India. Dr. Bhau Daji Lad Museum (Victoria & Albert Museum) and Heras Institute of Indian History and Culture are other important museums in Mumbai.

Formerly known as Victoria Terminus or VT, Chhatrapati Shivaji Terminus was designed by F.W. Stevens. Built in the Gothic style, this imposing building, which is now a UNESCO World Heritage Site, took 10 years to complete. Work on the Chhatrapati Shivaji Terminus, known as CST in popular parlance, started in May 1878. The terminus features beautiful embellishment and decoration on the façade which complement the splendid exteriors.

A popular beach, in the heart of the city, where festivals such as Coconut Day and Ganesh Chaturthi are celebrated. Also famous for the little kiosks selling Mumbai's special snacks, bhelpuri and kulfi (local ice cream). Within the beach, there are small gardens such as the “Nana-Nani Park”, “Bal Udyan” and a memorial of Bal Gangadhar Tilak. Chowpatty occupies a special place in the life of the people of Mumbai, having been the venue of political meetings during the pre-independence era. 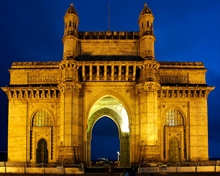 The signature monument of Mumbai, this 25 mtrs high stone archway was built to commemorate the visit King George V and Queen Mary to India in 1911.

Built in 1911 in the Indo-Saracenic style of architecture, the General Post Office is marked by a dome which bears a striking resemblance to that of the Gol Gumbaz of Bijapur in Karnataka.

This is the mausoleum of a Muslim saint who had died while on a pilgrimage to Mecca. The mosque and tomb are built on the spot where the casket containing his mortal remains came to rest on a rocky bed in the Arabian sea.

This stone fountain, in front of the Regal Cinema, was built to commemorate the visit of the Duke of Wellington who had won many battles.

Side trips around Mumbai

An hour-long voyage from Mumbai by ferry will take you the island of Elephanta, originally known as Gharapuri (fortress city), where the seventh century rock-cut cave temple complex, dedicated to Lord Shiva, has the potential of appealing to the sense of sight of the hordes of the visitors who throng to them. These painstakingly hewn cave shrines from the basalt rock were included in the list of World Heritage Sites in 1987.

38.4 Km, 40 Km and 44.8 Km respectively from Mumbai, Marve, Manori and Madh Beaches are beautiful stretches of beach. Also located on the same stretch are the Erangal, Aksa and Gorai beaches, perfect for organizing picnics. 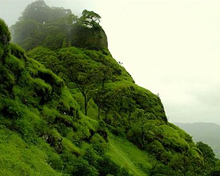 43 Km from Mumbai, Ghodbunder is located at the base of a hill, which overlooks the Bassein Creek. The Ghodbunder Fort is located on the top of the hill. The fort was under the Portuguese occupation till 1737 when it came under the control of the Marathas.

This 11th century Shiva temple is 61 Km from Mumbai. built by the Shilahara king Munmuniraja temple is embellished with exotic sculptures depicting scenes from the Puranas. Devotes throng in large numbers on the occasion of the annual fair held on Mahashivratri day. Local trains run from CST to Ambernath.

Located at a distance of 61 Km from Mumbai, Karnala is a birdwatchers’ paradise. Rrich with a wide range endemic and migratory species of birds, the sanctuary is home to 150 species of birds 30 of which are migratory. The fort captivates good number of trekkers and is an hour long climb. The fort houses a temple rock cut caves.

75 Km from Mumbai, Titwala is famous for shrine of the Siddhivinayak Mahaganapati Temple which attracts thousands of devotees.

Facing the Arabian Sea on the west, Alibag, 108 km away from Mumbai, is the administrative headquarters of the Raigad district in the state of Maharashtra and a popular weakened gateway from Mumbai.

The laid-back market town of Alibag is a surreal destination which is used as a base for exploring the beaches of Kihim, Varsoli, Awas, Akshi and Nagaon which are located within a radius of ten km from Alibag which is a lovely beach in itself.

165 km from Mumbai, Murud is a beautiful fishing town known for the commanding island fortress of Janjira and a charming beach. 52 km away from Alibag, Janjira was once a formidable fort, constructed in the 17th century AD. Today the fort stands in ruins. Janjira Fort is approachable via Rajpuri (6 km) from where it is connected by boat services.

Located 120 km north of Mumbai, Palghar is a compelling base to explore the surrounding beaches and places of scenic beauty. Chief attractions are the some fine beaches, remains of the forts, and temples. 18 Km. from Palghar is Manor situated in an idyllic landscape near the confluence of the Vaitarna River with its tributary, the Deherja. 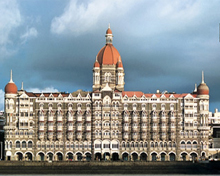 Where to Stay in Mumbai

The hotels in Mumbai cater to the needs of a wide array of tourists from business to leisure. These hotels are strategically placed to explore the capital of Maharashtra.

How to Reach Mumbai

By Air: Mumbai is connected by air with all the major cities in India and abroad.

By Rail: Chhatrapati Shivaji Terminus - CST (formerly Victoria Terminus), Mumbai Central, Dadar, Kurla and Bandra Terminus, the main railway stations in Mumbai, are connected by rail to all of the important cities and places in India.