These marvellous and beautifully constructed caves are located in Aurangabad district of Maharashtra, India about 30 rock-cut Buddhist cave monuments which date from the 2nd century BCE to about 480 or 650 CE.

The caves are situated in the Indian state of Maharashtra, near Jalgaon and just outside the village of Ajinha, about 59 kilometres from Jalgaon railway station on the Delhi Mumbai line and Howrah-Nagpur-Mumbai line of the Central Railway zone, and 104 kilometres (65 miles) from the city of Aurangabad.

They are 100 kilometres (62 miles) from the Ellora Caves, which contain Hindu and Jain temples as well as Buddhist caves, the last dating from a period similar to Ajanta.

These caves were discovered by an Army Officer in the Madras Regiment of the British Army in 1819 during one of his hunting expeditions. After that these caves became very prominent and Ajanta gained good tourist destination in the world.

The caves, well-known for its murals, are the finest surviving depictions of Indian art, particularly painting. The caves include paintings and sculptures described by the government Archaeological Survey of India as "the finest surviving examples of Indian art, particularly painting", which are masterpieces of Buddhist religious art, with figures of the Buddha and depictions of the Jataka tales. 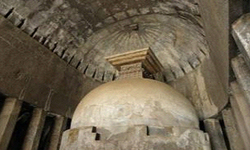 The caves were constructed in two phases starting around the 2nd century BCE, with the second group of caves built around 400-650 CE according to older accounts, or all in a brief period of 460 to 480 according to the recent schemes of Walter M. Spink. The Archaeological Survey of India is taking care of this monument, and since 1983, the Ajanta Caves have been a UNESCO World Heritage Site.

The Ajanta Caves are rock-cut cave monuments contain paintings and sculpture of both "Buddhist religious art" and "universal pictorial art". The multifaceted of Ajanta consists of several viharas (monastic halls of residence) and chaitya-grihas (stupa monument halls) cut into the mountain scarp.

The Ajanta caves are cut into the side of a cliff that is on the south side of a U-shaped gorge on the small river Waghur, and although they are now along and above a modern pathway running across the cliff.

People were originally used to reach by individual stairs or ladders from the side of the river 35 to 110 feet below. The archaeological structure of caves attract to world tourists. 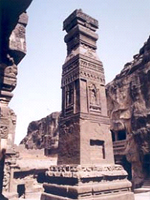 Ellora Caves are located in India Maharashtra. The Ellora caves, basically known as 'VerulLeni'. Ellora pronunciation is an archaeological site, 29 km (18 mi) North-West of the city of Aurangabad in the Indian state of Maharashtra.

Ellora is a World Heritage Site and popular for its monumental caves, Ellora signifies the essence of Indian rock-cut architecture. The 34 "caves" are actually structures excavated out of the vertical face of the Charanandri hills.

Buddhist, Hindu and Jain rock-cut temples and viharas and mathas were built between the 5th century and 10th century.

The 12 Buddhist (caves 1–12), 17 Hindu (caves 13–29) and 5 Jain (caves 30–34) caves, built in proximity, demonstrate the religious harmony prevalent during this period of Indian history. It is a secure monument under the Archaeological Survey of India. 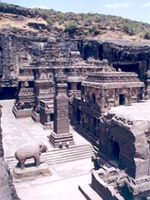 The caves are cut out of the volcanic basaltic formation of Maharasthra, known as 'Deccan Trap', the term trap being of Scandinavian origin representing the step like formation of the volcanic deposits. The rock formation, on weathering has given rise to the appearance of terraces with flat summits. 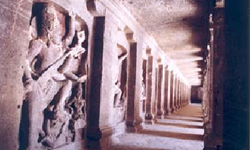 At Ellora, one can also have an indication of the channels (near Cave 32) through which the volcanic lava once flowed.

These channels, due to overheating, have a characteristic brownish red colour. Similar rock was used in the construction of the Grishneshwar Temple nearby and also utilised for the flooring of the pathways at Bibi-ka-Maqbara.

These architectural magnificence of caves and artistic expressions make wonderful place and attract lots of tourists.