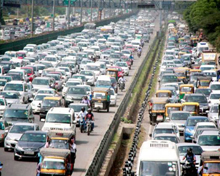 Rush hour traffic is a regular feature on Mumbai roads.

Hence, commuting a distance of 4-5 km will take nearly an hour or so due to choc-a-bloc vehicles at peak times.

While car-pooling system and the removal of encroachments at busy junctions have come not a day too soon, the increasing number of vehicles has made pedestrians' life riskier on footpaths.

Mumbai roads are not new to accidents, but the response of the city traffic police to major accidents has always been knee-jerk and not preventive, according to observers.

The absence of CCTVs on busy junctions and the staff crunch of traffic police have come in the way of effectively regulating the flow of vehicles.

Despite road safety campaigns organised across the city, there is no visible sign of reduction in the road accidents on Mumbai roads.

A majority of the accidents were caused by drunken driving, speeding and negligence of traffic rules.

Most noisy areas of Mumbai

Areas in South Central Mumbai are the noisiest in the Mumbai city, according to the figures of the traffic police department.

Stretches of Sion and Dadar along with the areas of Wadala and Dharavihave been earmarked as being the noisiest.

The high decibel levels have been attributed to unnecessary honking near schools, colleges, hospitals, residential colonies and places of worship.

Biking racing and rash driving with loud honking disturb the locality and residents complain that police constables don't exert themselves to curb the menace of speeding in the neighbourhoods.

Lack of road discipline in Maharashtra 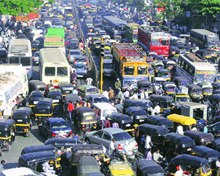 In Mumbai, it is common to get stuck in bumper-to-bumper traffic driving on the road.

Once known for following a disciplined road sense, Mumbai has now lost this reputation as it has become a driver's nightmare.

Now road indiscipline is the norm on Mumbai roads.

Jumping traffic signals, overtaking from the wrong side, lane cutting, disrespecting pedestrians, over-speeding and rash driving have all become a regular feature on Mumbai roads.

With the number of private cars in the city increasing and on-going infrastructure projects adding pressure on the overstretched roads, motorists turn caution to winds that result in messy situations.

South Mumbai has the lowest traffic violations compared to the rest of the city.

The east zone has the most cases of jumping signals, drunk driving, lane-cutting, fancy number plates, riding without helmets and steering without safety belts.

The west zone, stretching from Bandra to Jogeshwari, comes second in flouting traffic rules, but had maximum cases of honking, tinted glass and black films and using mobile phones while driving.

The traffic volumes at various junctions in the suburbs are far higher than in South Mumbai.

But the design and upkeep of roads in South Mumbai is far better than those in the suburbs.

One of the reasons for good roads in the South could be that VIPs use roads in this locality.

Road safety experts have called for the utilisation of spaces below flyovers.

At present, these spaces are covered by shanties, construction debris or random parking.

Newer roads like the Milan flyover, Sahar Elevated Road and Santa Cruz-Chembur Link Road have decongested traffic a little bit in the suburbs.

However, motorists pick up speed on these stretches that offer a good riding pleasure.

With the exception of the Eastern Freeway which ends in the suburbs, no new roads have come up in South Mumbai for a while, according to experts. 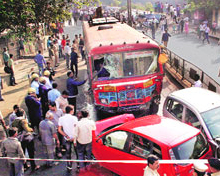 Highways are the lifeline of the people as they promote effective trade and commerce.

But these expressways are also killers with statistics painting a grim picture.

Of the total vehicles in the state, about 24.5 lakh vehicles (9.8%) were in Brihanmumbai.

The number of vehicles per km road length in the state is 95.

The number of valid motor driving licences in the state at the end of March 2014 was 2.77 crore, showing an increase of 6.9% over the previous year.

Road safety fortnights are observed with active campaign by the Mumbai traffic police by with very little change in the ground reality.

Plays and lectures based on theme of road safety are being organised in the state.

The number of accidents per 10,000 vehicles in Maharashtra andBrihanmumbai during 2014 are 25 and 92 respectively.

The BMC's second phase of Area Traffic Control (ATC) project aimed at improving traffic management in Mumbai is being delayed.

The agency appointed to prepare a detailed report on the city's traffic situation such as vehicle density at different times of the day, has sought another extension.

The consultant had requested the BMC to give it more time to submit a detailed mobility plan, after its one-year deadline came to end.

In 2014, the civic body had appointed Lee Associates, South Asia, as a consultant for the traffic survey for Rs 7.21 crore.

The ATC is an intelligent traffic system under which there is a management plan for 544 major junctions across the island city and its suburbs.

The traffic corridors to be looked at under Phase-2 and 3 of the ATC project will be finalised only after the consultant submits its report.

The consultant will give details of traffic flow and vehicles crossing the particular junctions.

With the help of this, vehicular movement will be monitored precisely, bringing relief from traffic jams.

Under the ATC's phase-1, the civic body has covered 253 junctions such as Haji Ali and Worli naka. 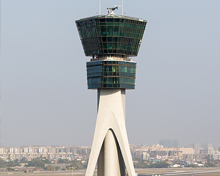