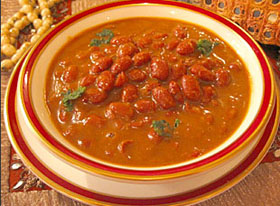 Although the red bean or Rajma is not originated from the Indian origin, the dish made out of Rajma is widely consumed by Indians of all the states, especially North-Indian states. The dry seeds were a valuable source of protein for sailors, and ships soon carried the kidney bean to Africa and Asia.

About 100 grams of boiled beans contain 140 calories, with 5.7 grams of protein, 5.9 grams of fat and nearly 17.8 grams of carbohydrate. Like most plant protein, the bean's amino acid profile is deficient in some essential amino acids. Eating cereals like wheat or corn along with beans helps get around this problem, as the Native Americans found out over 1,000 years ago. Apart from being energy rich, the beans are also rich in soluble dietary fibre. This type of fibre helps lower blood cholesterol levels.

Soak Rajma in water overnight or minimum of 8 to 9 hrs.
Pressures cook Rajma until Rajma Recipe tender.
Cut onion, tomato and green chillie. Grind it in mixie along with ginger and garlic and make paste.
Heat oil in a pan. Add the paste and fry on medium heat until golden brown (The oil starts separating from the mixture).
Add red chilli powder, turmeric powder, coriander powder, garam masala and salt. Mix well. Fry for 2-3 minutes.
Add water enough to make thick gravy. Bring the gravy to boil.
Add cooked rajma (along with the water in which it was cooked). Stir well and cook over medium heat for 5-7 minutes. Garnish with chopped green coriander leaves and serve hot.