Paneer tikka is highly favourite appetizer of North Indiansand also liked by people of other states in India.Previously,in Indian kitchen, paneer tikka was made in clay ovens known as tandoorbut in modern time, this starter are also made in ovens and even on gas stove using tawa (Indian pans).

There are two methods of making Paneer tikka:
Some guidelines to prepare paneer tikka:

We can also grill or roast the paneer tikka.To get delicious paneer tikka, it is best way to first marinate the paneer cubes for 2 hours or more. Then keep the marinated paneer overnight in the fridge.

The veggies can be used according to choice of person. Person can use red, yellow and green bell pepper with onions. If person does not have oven or grill, then he/she can use non-sticktava/flat pan heat some oil. Keep the skewered paneer on the tava and fry the paneer and veggies till cooked.

To make paneer tikka, it is necessary to have a smooth frying pan. To enhance flavour, one can add some besan/gram flour to the marinade as it avoids the paneer from sticking to the pan.

While grilling or baking the paneer tikka, they become dry. Hence oil is applied to the paneer and veggies to avoid them from becoming dry. It is not good to overcook the paneer as they then become elastic, dry and hard. Thepaneershould be soft, well cooked and yet tender. It’s better to bake the paneer tikka at low temperature for some more time than at higher temperatures.

The extra marinade can be applied or brushed on the paneer tikka before baking/grilling them. 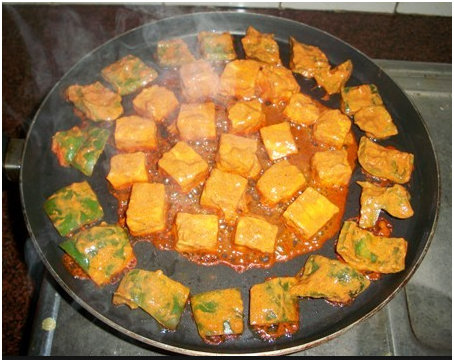 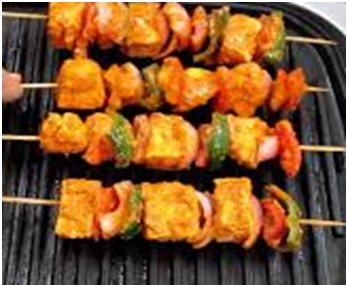 Recipe of paneer tikka is as follows:

To make Tikka: For the marinade:

Make Paneer Tikka In The Oven:

Paneer tikka can be served as a starter with sliced onions, lime and mint yogurt chutney. It is found that Paneer is high protein food and also a good source of calcium. Nutritional facts suggests that there are 40 calories in 1 piece of Paneer Tikka.

This yummy starter will definitely allure to guests and they will enjoy eating it.