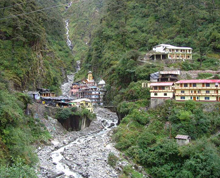 Tiny Himalayan state Uttarakhand was formed on the 9 November 2000 as the 27th state of India, when it was carved out of northern Uttar Pradesh.

Located on the foothills of the Himalayan mountain ranges, it is largely a hilly state, having international boundaries with China (Tibet) in the north and Nepal in the east. On its north-west lies Himachal Pradesh, while on the south is Uttar Pradesh.

It is rich in natural resources especially water and forests with many glaciers, rivers, dense forests and snow-clad mountain peaks. Spread over a rugged mountainous area of 53,483 sq.km, Uttarakhand as a population of 10 million with agriculture and handicrafts being the main occupation of its people.

Char-dhams, the four most sacred and revered Hindu temples of Badrinath, Kedarnath, Gangotri and Yamunotri are nestled in the mighty mountains. Uttarakhand is known as Dev Bhoomi (God’s land) for it attracts millions of pilgrims throughout the year.

The pilgrims visit ancient shrines and holy towns that are most sacred and a must-visit in the life time of Hindus.

Dehradun is the interim capital of Uttarakhand and is the largest hill city with a major railhead. The state is divided into two divisions, Garhwal and Kumaon, with a total of 13 districts. The high court of the state is in Nainital.

Dehradun is one of the most beautiful resorts in the sub-mountain tracts of India, known for its scenic surroundings. The hill station lies in the Dun Valley, on the watershed of the Ganga and Yamuna rivers.

It is blessed with a rare bio-diversity including 175 rare species of aromatic and medicinal plants are found in the state. It has almost all major climatic zones, making it amenable to a variety of commercial opportunities in horticulture, floriculture and agriculture.

The Himalayan state has a vast tourism potential in adventure, leisure, and eco-tourism. Uttarakhand is rich in mineral deposits like limestone, marble, rock phosphate, dolomite, magnesite, copper and gypsum, among others.

The number of small scale industries is 25,294 providing employment to 63,599 persons. As many as 1802 heavy and medium industries with an investment of Rs 20,000 crore employ 5 lakh persons.

Most of the industries are forest-based. There is a total of 54,047 handicraft units in the state. With levels of literacy higher than the national average, the state has abundant availability of quality human resources. Within a short span of its existence, Uttarakhand had emerged as a significant destination for investments in manufacturing, tourism and infrastructure.

Emphasis is on stimulating all three sectors of its economy (agriculture, industry and services), to their fullest potential in tandem with the geographic profile of the state. The government of Uttarakhand has undertaken several policy measures and incentives in order to encourage inflow of investment into the various sectors of its economy.

The natives of the state are generally called Uttarakhandis or more specifically eitherGarhwali or Kumaoni depending on their place of origin. According to the 2011 Census, Uttarakhand has a population of 10,116,752, making it the 19th most populous state in India.

A large portion of the population consists of Rajputs and Brahmins. About 83% of the population follow Hinduism. Islam is the largest minority religion in the state, followed by Sikhism, Christianity, Buddhism, and Jainism.

Garhwali and Kumaoni along with other hilly dialects and sub-dialects are the main regional languages, whereas Hindi is the most widely spoken language. Uttarakhand is the only state in India with Sanskrit as one of its official languages.

What does Uttarakhand mean?

Uttarakhand was also the ancient Puranic term for the central stretch of the Indian Himalayas. However, the region was given the name Uttaranchal by the BJP-led central government and Uttar Pradesh government when they started a new round of state reorganisation in 1998. Chosen for its allegedly less separatist connotations, the name change generated enormous controversy among many statehood activists.

In August 2006, the Union cabinet assented to the demands of the state assembly and leading members of the statehood movement to rename Uttaranchal state as Uttarakhand. Legislation to that effect was passed by the legislative Assembly in October 2006.

The Union cabinet brought in the bill in the winter session of Parliament. The bill was passed by Parliament and signed into law by then President A.P.J. Abdul Kalam in December 2006. Since January 1, 2007 the state is known as Uttarakhand.