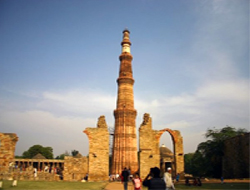 Qutb Minar is world fame and India's tallest minar with 72.5 metres high. It has total 379 stairs and has 14.3 metres base diameter. Qutub Minar was built by Qutub-ud-din Aibak and Iltutmish in 1192. It was included in the World Heritage sites of India by UNESCO.

Qutb-Minar is stand stone building. Qutbu'd-Din Aibak used the mu'azzin (crier) to give calls for prayer and raised the first storey, to which three more storeys were added by his successor and son-in-law, Shamsu'd-Din Iltutmish (AD 1211-36).

All the storeys are surrounded by a projected balcony encircling the minar and supported by stone brackets, which are decorated with honey-comb design, more conspicuously in the first storey.

Many inscriptions in Arabic and Nagari characters in different places of the minar reveal the history of Qutb. It is the earliest extant mosque built by the Delhi Sultans. It consists of a rectangular courtyard enclosed by cloisters, erected with the carved columns and architectural members of 27 Hindu and Jaina temples which were demolished by Qutbu'd-Din Aibak as recorded in his inscription on the main eastern entrance. 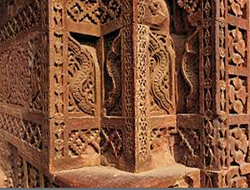 The surrounding archaeological area contains funerary buildings, notably the magnificent Alai-Darwaza Gate, the masterpiece of Indo-Muslim art (built in 1311), and two mosques, including the Quwwatu'l-Islam, the oldest in northern India.

Qutb Minar and its monuments is a group of religious and funerary buildings that exhibit the architectural and artistic achievements of early Islamic India. Qutubminar is made on afghan architecture.

Now, it is a appealing place for tourist in Delhi. Qutubminar is an attractive structure of red marble and also it is known as marble tower of success. Qutub means pole of justices and it is recognized as symbol of Islamic justice.

It is premium mounment in World. The QutubMinar is the attraction of the Qutub complex. It is estimated that the QutubMinar attracts more than 3.9 million visitors each year.

Red Fort, Delhi, is well known archaeological building commonly known as Lal Qila. It was built between A.D. 1639 and 1648 by Mughal emperor Shahjahan.

The art work in the Fort is a combination of Persian, European and Indian art which resulted in the development of unique Shahjahani style, which is rich in form, expression and colour.

Red Fort, Delhi reveals a long period of Indian history and its arts.

Its importance has transcended time and space. It is pertinent as a symbol of architectural vividness and power.

The fort, situated on the west bank of the river Yamuna, is octagonal in plan, with two longer sides on east and west and is provided with four gates that include Lahori, Delhi, Yamuna and Salimgarh gate. On the north, the Red fort is joined with the Salimgarh Fort by a bridge.

Lahori gate, a splendid three-storeyed structure, later screened by a barbican by Aurangzeb, served as the main entrance. Palaces, lying on the eastern side of the Fort, are approached from the Lahori gate through a roofed passage, flanked by double-storeyed arcaded apartments called Chhatta-Chowk and being used as shops.

The Delhi gate is bordered on the outside by two elephants, commissioned in 1903 by Lord Curzon in place of the original ones demolished by Aurangzeb.

The monument was first referred for dedication on World Heritage List in the year 1992 but was deferred due to multi-administrative control of the Red Fort. The proposal was re-submitted by the Archaeological Survey of India to UNESCO in 2006.

The World Heritage Committee in its meeting held on 23rd to 27th June, 2007 at Christchurch, New Zealand recognized the nomination of the Red Fort Complex, Delhi for inscription on the World Heritage List.