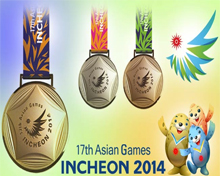 The 2014 Asian Games is the largest sporting event in Asia governed by Olympic Council of Asia.

It is scheduled to take place in Incheon, South Korea from September 19th - October 4th, 2014, with 439 events in 36 sports and disciplines set to feature in the Games represented by 9,501 Athletes.

Guangzhou : The skies lit up with dazzling fireworks as an emotional China brought the curtains down on the biggest Asian Games in a riot of colour, foot-tapping music and a cultural extravaganza at the Haixinsha Island on the Pearl River.

Deep Rooted in the Far East Championships, the modern 'Asian Games' was founded in 1951 inspired by the sports and games competition between China, Japan and the Philippines between 1913-34. These Asian Games were organised by the Asian Games Federation (AGF) till on December 5, 1982 when the Olympic Council of Asia (OCA) came into existence in New Delhi during the IX Asian Games.

The primary goal of this organization, Olympic Council of Asia (OCA) is to promote and propagate the importance of an Asian identity and foster unity amongst Asians through sports and games. The Asian Games truly represent the Games of Asia in every four years. In 1951 in New Delhi, India; Asian Games had 11 nations and 489 athletes in competition. The Asian Games were organised at a number of places like Manila, Tokyo, Jakarta, Bangkok, Tehran, Seoul, Beijing, Hiroshima and Busan.

The emblem of the Asian Games consists of the five Olympic Rings (which were added in 1983) and an Orange Sun at the top. Whereas the Olympic rings boast of its grandeur that resembles to the Olympics, the Orange Sun represents the warmth inherent in the Asians. The Olympic Council of Asia is thus committed to develop the physical and moral faculties of the Asian Youth though friendship, international respect and the goodwill amongst the member countries.

Venues of the SAF Games