About Jammu and Kashmir

Jammu and Kashmir is one of the few states that has been able to avoid the full onslaught of commercialization over the last few decades.

The state has been able to preserve its earthly splendour but one of the down sides also is the state has a significant percentage of unemployed youth due to lack of job opportunities.

However in recent times, several consumer goods manufacturing companies have shown their interests to set up their units in this region. The economy of Jammu & Kashmir is largely dependent on farming and animal husbandry. 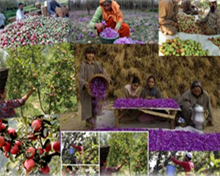 Agriculture of Jammu and Kashmir

Prior to the terrorist strikes since 1989 Jammu and Kashmir had a flourishing tourist industry. The numbers have dwindled since then but the figures have been improving in the last few years and things are indeed looking optimistic.

The majority of the people of Jammu and Kashmir practice agriculture of different styles some of which includes - terraced slopes with each crop being adapted to local conditions.

Rice, the staple crop, is planted in May and harvested in late September. Corn, millet, pulses (legumes such as peas, beans, and lentils), cotton, and tobacco are-with rice-the main summer crops, while wheat and barley are the chief spring crops.

Many temperate fruits and vegetables are grown in areas adjacent to urban markets or in well-watered areas with rich organic. 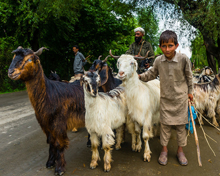 The state of Jammu and Kashmir is blessed with good natural resources and is an important source of revenue for the state. The types of wood available from Kashmir include fir pine, spruce, deodar, chir, kali, etc. are of great economic value. 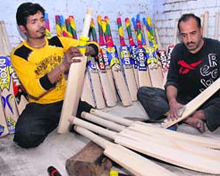 The woods are useful for Match Industry, Sports goods industries, Sentonin Factory etc. Kasmiri wood is also a popular choice for making cricket bats which happens to be the most widely viewed sport in India.

Education in the state of Jammu and Kashmir is relatively strong. The literacy rates of the state are comparable to the national average.

In addition, agricultural schools have been established in Srinagar (1982) and Jammu (1999). A specialized institute of medical sciences was founded in Srinagar in 1982.