The LDF won the assembly polls comfortably in Kerala. Out of 140 seats, they are leading in 90 seats, while Congress-led UDF is leading in just 46 seats. BJP has done better this time. They not only managed to open their account in Kerala, but also leading in 3 seats. The results came as a big setback to the Congress, while it was a big relief for the Left after the debacle in West Bengal. 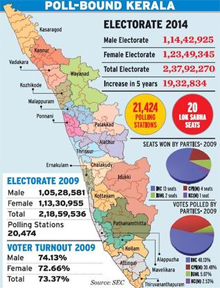 Fondly called as 'God's own country', Kerala is a state located in the south west region of India along the Malabar Coast.

This beautiful state on the coastline of Arabian Sea was formed in November 1956 by combining all the Malayali speaking regions of South India.

There are 20 parliamentary (Lok Sabha) seats in Kerala.

One of the main features about voters in Kerala is the large numbers of NRI electors.

About 97% of the total number of NRIs who had enrolled for the 2014 Lok Sabha polls are from Kerala itself constituting a total of 11,488 voters.

The government apparatus is headquartered in Thiruvananthapuram, the state capital and is headed by Chief Minister Oommen Chandy from the Indian National Congress.

Once again the ruling United Democratic Alliance (UDF) led by its main partner Congress put up a better show than its arch-rival Left Democratic Front (LDF) led by the CPI(M) in the May 2014 general elections.

The state of Kerala has 20 seats in the Lok Sabha, out of which eight seats are won by the Congress followed by the CPI(M) which bagged five seats.

The LDF and the UDF are the major political fronts in the state as the power equations shift between either of these two broad political alliances.

While the Congress leads the UDF, the CPI(M) is the main alliance partner in the LDF.

According to the exit polls before the Lok Sabha polls 2014, both the LDF and UDF had equal opportunity to grab maximum number of seats out of 20 Lok Sabha seats in this state.

The 13th assembly election on 13 April 2011 to elect members of the 140 constituencies in Kerala was one of the closely fought electoral battles in the state.

In the end, the UDF led by the Congress beat the incumbent LDF by a slender margin of 4 assembly seats.

The filing of nominations for the elections ended on 26 March 2011.

A total of 1,373 contestants filed nominations. The scrutiny of nominations was held on 29 March 2011.

A total of 971 candidates contested the elections, after the withdrawal of nominations closed.

The polling to elect members of assembly from the 140 constituencies in Kerala was conducted on 13 April 2011 with a 75.12% voter turnout in the state.

Re-polling was conducted on two polling stations in the state on 16-April-2011 in the assembly constituencies of Pattambi and Chalakkudy.

The election resulted in a slender victory for the UDF coalition winning 72 out of the 140 seats while the incumbent LDF garnered the remaining 68 seats.

The UDF lead was further extended to 73 through the subsequent by-election in Neyyattinkara constituency in which the incumbent MLA R. Selvaraj resigned from LDF to join UDF and got re-elected.

Alliance break-up between UDF and LDF