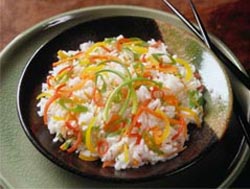 Boil the rice in salted water. Each grain of the cooked rice should be separate. Drain and cool. Soak saffron in little hot milk and rub until it dissolves. Heat the ghee and fry the onions until brown and crisp. Remove the onions and in the same ghee, add the cashewnuts and raisins and fry for a few seconds. Remove and keep aside for garnish.

In the same ghee, add the ground paste and fry for 3 to 4 minutes. Add the tomatoes and fry again for 2 to 3 minutes. Add the yoghurt and fry till liquid evaporates a bit. Add the boiled vegetables, mint, coriander and cook for a while.

Grease a baking dish. Spread half the vegetables on it. Layer half the rice on it. Sprinkle, half the saffron liquid, half the onions, half the fried nuts. Repeat with the remaining vegetables, rice, saffron and nuts. Dot with butter. Cover and bake in a hot oven at 200C for about 15 minutes. Alternatively, layer in a pan with a very tight lid and keep on a very slow flame for 10 minutes. Serve hot with raita.