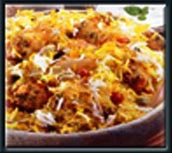 A popular Indian recipe biryani is a mixed rice dish with a lot of spices, vegetables or meat served during Indian festivals especially during Ramzan as this is considered as a delicacy for Muslims.

In North India, the recipe is mostly associated with the Mughlai cuisine of Delhi and the Awadhi cuisine of Lucknow. Whereas in South India, this special dish is quite popular in Hyderabad from the days of Nizam reign.

But the exact origin of the term Biryani is uncertain. While the word is supposed to have derived from the Persian language from the root word "birinj" which means rice.

Another belief is that it might have got its name from the Persion word "biryan" or "beriyan" which means "to fry or roast".

While on theory says that Mughals had brought biryani to India, there is also a strong claim that this dish had existed even before the arrival of King Babur.

A 16th century Mughal text called Ain-i-Akbari makes no distinction between "biryanis" and "pulao" and further states that the former word has been in use in India for a very long time.

The ancient texts of the subcontinent have many references to a "fried rice" flavoured with aromatic spices and condiments which was enjoyed by the elite.

According to some culinary experts, the biryani is essentially a South Indian recipe derived from pilaf variaties made popular by the Muslim traders and rulers.

A similar dish pulao was an army dish in medieval India. While elaborate meals are not possible in the army camps, they would prepare a one-pot dish where they cooked rice with whateaver meat was available then.

Over time, this menu became biryani due to different methods of cooking.

The modern biryani was a product of Mughal kitchen with a confluence of the Persian pilau and the spicy rice dishes of India, according to one school of thought.

It is believed that one branch of biryani comes from the Mughals and another was brought by the Arab traders to Calicut in South India.

The dish is usually served with dahi chutney or raita, korma, curry, a sour dish of aubergine (brinjal), boiled egg and salad.

Pulao is another mixed rice dish that is commonly prepared in Indian households.

However, biryani has a stronger taste of curried rice due to a higher amount of spices.

Biryani has two layers of rice with a layer of meat (or vegetables) in the middle, while pulao does not have layers.

In pulao, the rice and meat are cooked separately and then mixed before the dum cooking. While in biryani, the soaked rice is fried and then cooked with the meat and spices.

There are two basic types of biryani -- pakki, pukka or cooked and kacchi, kutchi or raw.

In pakki type, the cooked meat and cooked rice are layered.

In the kacchi, raw marinated meat is layered with raw rice before being cooked together.It is cooked typically with goat meat or lamb, and rarely with chicken or beef.

The dish is cooked layered with the meat and the yogurt based marinade at the bottom of the cooking pot and the layer of rice (usually basmati rice) placed over it.

Potatoes are often added before adding the rice layer. The pot is usually sealed, typically with wheat dough, to allow cooking in its own steam and not opened till ready to serve.

A boiled egg and mixed salad often accompanies the dish. It is featured in wedding feasts in Bangladesh, usually served with borhani, a spicy drink.

The vegetable biryani is prepared with rice, masala and non-meat ingredients such as potatoes and cauliflowers.Egg biryani is another type of biryani.

Tahari (also called as Tehri or Tehari) is a vegeterain biryani prepared for the Hindu accountants of the Muslim rulers of India.

It is prepared by adding the potatoes to the rice instead of traditional ingredients like meat or chicken.

The other popular varities based on their main ingredient are chicken, beef, mutton, egg, shrimp, fish, daal and soya biryanis.

This popular dish has different taste depending on where it is being prepared in India. For there are changes in the main ingredients along with the spices, condiments which drastically alters the entire finished recipe.

First prepared under the rule of Asaf Jah I, who was appointed as the Governor of Deccan by the Mughal emperor Aurangzeb. It is made with basmati rice, spices and goat.

Here the main ingredients are chicken, spices and the specialty is the rice named Khyma which is generally mixed with ghee.

This dum biryani is a pakki biryani. The rice and meat are partially cooked separately; then layered and cooked by the dum pukht method.