Sushruta plastic surgeryThe development of ancient Indian medicine system can be traced right from the Indus Valley Civilization. The archaeological remains of Harappa and Mohenjodaro suggest the evidence for the existence of a medicine system. The Indus people used plant drugs, animal products and minerals. In one of the excavations Silajatu (Silajit) has been found, which indicates that it might have been used by the Indus people.

However, there are not many evidences to support the medical system prevailing during the Indus period. Notwithstanding the facts, it is impossible to believe that there was no medical system to cater to the large urban settlements and knowledge of elaborate town planning.

The ancient system of medicine finds more graphic details in the Vedic civilization that flourished in the Gangetic plains from 1000 BC onwards.  The earliest treatise Rig Veda mentions that Dhanvantari 17th incarnation of Lord Vishnu was worshipped as God of medicine. It was also regarded as the source of Ayurveda.  The other reference to medical practice in Vedic age finds mention in the worship of Ashvins or Ashwini Kumaras, the twin gods that averted misfortune and sickness. They are considered as the doctors of gods and devas of Ayurvedic medicine. 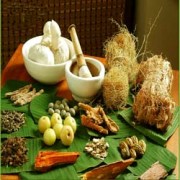 AyurvedaAyurveda, meaning the science of longevity, was an indigenous system of medicine in ancient India. The oldest known Ayurvedic texts are the Suśruta Saṃhitā and the Charaka Saṃhitā.  It contains information about diseases, their diagnosis and expected cures.

Ayurveda as an art of healing was treated with respect in ancient India. The knowledge systemized as Ayurveda was considered at par with the Vedas. The   knowledge of Ayurveda was passed from generations to generations and was spread among sages, hermits and other religious men who moved from one place to another. Those who solely practiced this form of medicine were known as Vaidyas and they belonged to the Brahmin caste.

Ancient scholars of India like Atreya, and Agnivesa have dealt with principles of Ayurveda as long back as 800 BC. Agnivesa was a famous physician wrote an encyclopedic treatise in the eighth- century B.C. Their works and other developments were consolidated by Charaka who compiled a compendium of Ayurvedic principles and practices in his treatise Charaka-Samahita.

CharakaCharaka was a noted Ayurveda practitioner who wrote the famous treatise on medicine Charaka Samahita. He wrote extensively on digestion, metabolism and immune system. According to him body functions because it contains three doshas - bile, phlegm and wind. These are produced when dhatus - blood, flesh and marrow act after food is consumed. The body becomes sick when there is imbalance between three doshas. He prescribed drugs to restore this balance.

Charaka gives advice that physician who fails to enter the body of a patient with the lamp of knowledge and understanding can never treat diseases. He put more emphasis on prevention rather than cure.

Charaka also wrote about genetics like the factors responsible for sex of a child. Charaka has theorized blindness from the birth is not due to any defect in the mother or the father, but owes its origin in the ovum and the sperm. The other notable fields Charaka Samahita deals with are physiology, etiology and embryology.

Shushruta- Samhita is the oldest treatise dealing with the practical problems of surgery and obstetrics.It was written by Shushruta who studied human anatomy in great detail with aid of a dead body.  He lived in Kashi, the modern day Varanasi.

Surgery was termed as Sastrakarma and considered as one of the eight branches of Ayurveda. The first instances of surgery were recorded around 800 B.C.

Shushruta- Samhita records the detail description of the steps to be taken during the performance of a surgical operation.

Shushruta was equipped with excellent surgical skills and elevated the practical science of surgery to the level of art.  He excelled in plastic surgery and ophthalmology (removing cataracts). One of the greatest contributions of Shushruta was the restoration of mutilated nose or rhinoplasty.

It is recorded that the success rate of surgery performed by Sushruta was very high and he attracted people from all over the country and even outside.  He meticulously carried out the operation almost similar to the steps followed by the modern day surgeons. 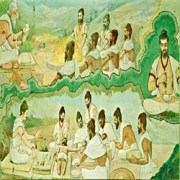 AgnivesaYoga, a system of exercise for physical and mental nourishment was part and parcel of the ancient system of medicine. Though it has been in existence for long time, it was around 200 BC, Patanjali in his treatise, Yogasutra collected all the fundamentals of yoga. Patanjali surmised that through the practice of yoga, the latent energy within the human body can be made live and released, that can have a salubrious effect on the body and the mind. He practiced and preached yogic practices that can control of several ailments and chronic disease.

The ancient system of medicine grew further with trade and cultural contacts with other countries of the world.  The Indian medical knowledge was transmitted to other countries through Indian merchants and Buddhist monks.

The Buddhist monks took the Ayurveda system of medicine to Tibet and China. India’s contact with the Arab world led to the translation of Indian medical books like Charak Samhita, Susrut Samhita, into Arabic language. Indian concepts of medicine also influenced the Greeks who came in India contact during the Indo-Greek rule in 180 BC-10 AD.

Ancient Indian medicine has a great connection to medicinal plants as much of the medicines were made with a combination of plants and minerals or even only plant extracts. Some of the common medicinal plants used is Ayurveda are believed to have been used since ancient times. Some common medicinal plants used are - Amla, Ahoka (even mentioned in the Ramayana), Aswagandha, Bael, Brahmi, Chiraita, Guggul, Sandal Wood, Satavari, Tulsi, Pippermint, Gritkumari (Aloe), Vringraj, Rakta Chitrak, Neem and lots of spices like turmeric, pepper, dalchini, elaichi etc.