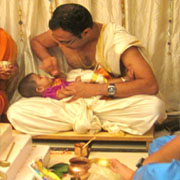 One of the largest linguistic community in the country, Telugus choose names that blend modernity with a traditional touch. While the surname (or family name) mentions their caste, the prefix part keeps abreast of modern times with catchy syllable.

Family heritage and local affiliations are given weightage during the naming ceremony of a Telugu baby in which relatives and social circles are invited for a gala occasion.

Baalasaare (or) Namakarana Dolarohana (or) Naam Karan is a traditional ceremony of naming a newborn baby among Hindu communities of Andhra Pradesh and Telangana.

Baalasaare is usually celebrated on 21st day after the birth of child, while Brahmins consult the astrologer to fix the auspicious time for the naming ceremony.
Celebrated either at a temple or at home which is cleaned thoroughly to conduct pujas. On the day, the child is given bath, clothed and made to lie in a cradle.

Women gather around the cradle to sing some traditional songs. In the ritual mother is honoured and child is blessed by the elders. 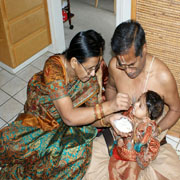 The father whispers the chosen name into the child’s ear for three times. The name is also written on a rice mould spread on the floor or on a tray.

The child's maternal uncle takes a gold ring dipped in a mixture of cow milk and honey and keeps it on the child's tongue. After naming the child, elders bless the child to earn name and fame in the society and to have bright future.

While the child won’t be able to understand the meaning of this ceremony, it is expected of the parents to take up the sole responsibility to take care of the newborn and raise it to a respectable status in the society in his or her lifetime.

Like in other states, caste and regional affiliations are taken into consideration while the child after much deliberation among the elders.