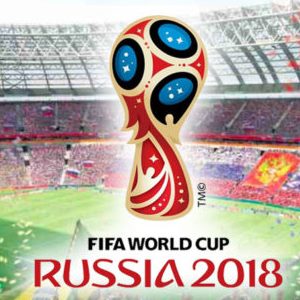 The 2018 FIFA World Cup will be the 21st FIFA World Cup, a quadrennial international football tournament contested by the men's national teams of the member associations of FIFA. It is scheduled to take place in Russia from 14 June to 15 July 2018. This will be the first World Cup held in Europe since the 2006 tournament in Germany, the first ever to be held in Eastern Europe and the eleventh time that it has been held in Europe.

For the first time in the history of the FIFA World Cup, all eligible nations – the 209 FIFA member associations minus automatically qualified hosts Russia – entered the qualifying process.Zimbabwe and Indonesia were later disqualified before playing their first matches

Russia proposed the following host cities: Kaliningrad, Kazan, Krasnodar, Moscow, Nizhny Novgorod, Rostov-on-Don, Saint Petersburg, Samara, Saransk, Sochi, Volgograd, Yaroslavl, and Yekaterinburg. All the cities are in or just outside European Russia to reduce travel time for the teams in the huge country.

The bid evaluation report stated: "The Russian bid proposes 13 host cities and 16 stadiums, thus exceeding FIFA's minimum requirement. Three of the 16 stadiums would be renovated, and 13 would be newly constructed.

In 2014 FIFA World Cup final, Germany defeated Argentina 1–0 to win the tournament and secure the country's fourth world title, the first after the German reunification in 1990, when as West Germany they also beat Argentina in the World Cup final. Germany became the first European team to win a World Cup staged in the Americas, and this result marked the first time that nations from the same continent won three consecutive tournaments

Football is the second most popular game in India after that Cricket. In September 2006, India brazil signed an agreement formalizing a scheme to train Indian Footballers and coachers.In India most of the states give much importance to football like West Bengal, Goa, Kerala, Manipur, Mizoram , Sikkim and Meghalaya. 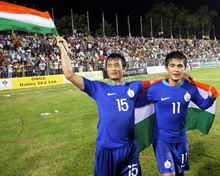 It is the first ever season of the Indian Super League, the Indian professional league for association football franchises, since its establishment in 2013.

The I-League, is one of the most popular sports league in the India, and is home to some of India's most famous football clubs. the I-League is the india's domestic football league. 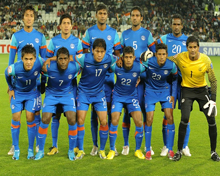 The National Football League, established in 1996 by the All India Football Federation was the first semi-professional football league in India. India football committe has organised many Cometitions like,

Presently it is the most important club tournament after I-league. Winning club of Federation cup gets a chance to compete in the continental level in AFC Champions League along with I-league champion team.

The Durand Football Tournament was started by then, India's Foreign Secretary, Mortimer Durand at Simla in 1888, It was basically initiated, as a recreation for British troops stationed in India.In 1940 the venue was shifted to New Delhi. 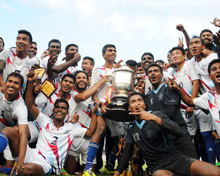 The winners of the game receive the Shield as a trophy for the year, while players also receive individual winners medals.

Santosh Trophy is an annual Indian football tournament which is contested by states and government institutions. The first winners were Bengal.

The IFA Shield is an annual football competition organized by the Indian Football Association. It is the fourth oldest club cup competition in the world (Started in 1893) after the English and Scottish FA cup's and the Durand Cup.