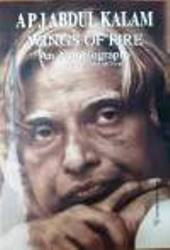 A wing of Fire is an inspiring autobiography of Former Indian President Dr APJ Abdul Kalam. The autobiographical novel narrates the various incidences to the readers about a story about unlocking their inner potential. Author mentions several incidences in his life, which helped to ignite the inner strength. Divided into seven sections, it starts with an Introduction and Preface, where it is then followed by an Orientation.

Covering several important events in his life, the Orientation section describes many insights into the birth, childhood, and education. The education section covers Kalam's experience in Schwartz High School and Madras Institute of Technology. The section also includes middle background of the eminent scientist. Kalam also recollect his memories of his visit to Langley Research Center, NASA, and Wallops Flight Facility. In the chapter titled, 'Creation', Kalam also shares his memories of the time his father passes away.

Notable mention is the Kalam's contribution during the development of the guided missile development program, and creating 5 formidable missiles. Dubbed as Missile Man of India, the book contains 24 rare photos taken at different times in the Former President's life. It should be noted that the book is translated into 13 languages, which include Tamil, Malayalam, Chinese, French, Gujarati, and Oriya.