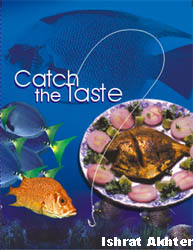 This Recipe book is about fishing and fish recipes. Written in a conversational style, it is full of anecdotes and humour.

"Apart from the above sources another source of fish were the dozen odd small ponds we had. After the rains had fully subsided, the water from these ponds was manually removed. It would take a day or two to have this done and I would always be sent to watch. An open-mouthed tin would be tied with ropes - four in number, two each on two opposite sides. Then two people standing on adjacent banks of a corner of the pond and each holding the ropes of one side would together synchronise and pull out the water and throw the water on the outerside of the pond. The tin would repeatedly be thrown into the water and the ropes pulled bringing the tin forward with a thrust thus throwing the water out. A net would be placed where the water fell so that the fish that came along would be caught in the net. After all the water had been thus emptied, the men descended into the mud and caught the fish with their hands."


Put in enough oil in a kadai so as to fry the onions well (around a quarter teacup). When the onion are fried and start appearing slightly crisp (the onions should not be browned) add the chilli, and a little turmeric and salt, and fry for a while.