So you are in love? Send a valentine's day card to the love of your life. Express your love and see your valentine grow close to you. A valentine day card can be sent to anyone you love dearly and not your boyfriend or girlfriend alone.

We have a good collection of valentine day cards or love cards as some prefer to term it, including animated love cards and printable love cards. Simply email or print the valentine cards of your choice and there you go.

Express your care on your friend by sending Valentine friends card.

Send Valentine Miss You Card to your beloved one even if you missed them.

Every year the 14th of February is celebrated as a day of romantic commemoration by millions of couples across the world by presenting their loved ones with gifts, candy, flowers and lots of love. On this day you will find in many countries, restaurants and eateries being filled with couples who are eager to celebrate their relationship and experience the joy of their togetherness. The reason behind all of this is a kindly cleric named Valentine who died more than a thousand years ago and hence the name Valentines Day.

While the history and accuracy of Valentine's Day - and of its patron saint is shrouded in mystery, the month of February for long has been known as the month of romance. St. Valentine's Day, as we know it today, contains vestiges of both Christian and ancient Roman traditions. Catholic Church recognizes at least three different saints named Valentine or Valentinus, all of whom were martyred.

According to one legend Valentine was a priest who served during the third century in Rome. When Emperor Claudius II decided that single men made better soldiers than those with wives and children, he outlawed marriage for the young men who formed the major crop of his soldiers. Valentine defied Claudius and continued to perform marriages for young lovers in secret. When Valentine's actions were discovered, Claudius ordered that he be put to death. 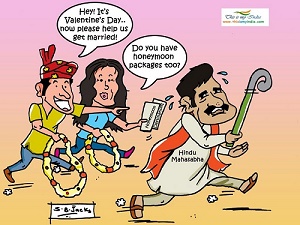 In another version the first 'Valentine' greeting was sent by Valentine himself. While in prison, it is believed that Valentine fell in love with a young girl who happened to be the jailor's daughter. She used to visit him during his time in confinement. Before his death, it is alleged that he wrote her a letter, which he signed "From your Valentine," an expression that is still used today.

With the spread of Christianity, Pope Gelasius declared February 14 as St. Valentine's Day around 498 A.D. In that way 14th February became a day for all lovers and Valentine became its Patron Saint. It began to be celebrated annually where young Romans who offered handwritten greetings of affection, known as Valentines, on this day to the women they admired.

In Great Britain, Valentine's Day began to gain popularity in the 17th century. By the middle of the 18th century, it was common for friends and lovers in all social classes to exchange small tokens of affection, gifts or handwritten notes. By the end of the century, printed cards came about to replace hand written letters as a result of the improvements made in printing.

Ready-made cards with richly laid out words were available to people to express their emotions in a time when direct expression of one's feelings was often discouraged. The first commercial made Valentine's Day greeting cards in the U.S. were created by Esther A. Howland. Howland in 1840's. She was known as the Mother of the Valentine, and she made elaborate creations with real lace, ribbons and colorful pictures known as "scrap."