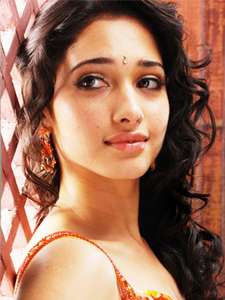 
Tamannaah Bhatia is an enticing actress and a top ranking heroine in the South Indian film industry. She has belted out many super hit movies and has a huge fan following.

Tamanna was born on 21 December 1989 in Mumbai, in the family of Santhosh and Rajani Bhatia. Her father is a financial consultant. She has an elder brother, Anand.

She came to limelight through the music video of Abhijeet Sawant, the winner of first Indian Idol. Tamannaah entered into films through Bollywood film  ‘Chand Sa Roshan Chehra’ in 2005.  After that she headed to the South Indian film industry.   She made her acting debut in the Telugu film Sri in 2005 and in 2006 she acted in the first Tamil film, Kedi.

She was chosen to act in two college-life-based drama films, ‘Happy Days’ in Telugu and ‘Kalloori in Tamil. These movies released in 2007 were highly successful and Tamannaah got acclamation for her excellent performance.

After that she played dominant role in many blockbuster films like Padikathavan (2009), Ayan (2009), Paiyaa (2010) and Siruthai (2011). Tamannaah made a successful comeback in Tollywood in 2011 with the romance film ‘100% Love’ for which she grabbed many awards.

She acted in super hit movies like as Racha (2012), Cameraman Ganga Tho Rambabu (2012) and Thadaka (2013). She acted in the Telugu historical film Badhrinaadh in 2011 opposite Allu Arjun that flopped.

She also starred in Tamil action film Hari's Venghai (2011) opposite Dhanush that was not so successful. Tamannaahis is honoured with many awards for her performances in Indian cinema. She won the CineMAA Award for Best Actress and received nominations at various other award ceremonies.