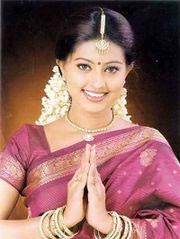 Sneha alias Suhasiniis is a charming heroine of Southern Indian film industry. The peculiar thing about her is she looks gorgeous even when she performs without makeup.

Sneha was born on 12 October 1981 in Mumbai and brought up in Dubai. She was noticed in a cultural show in Dubai by Malayalam film director Fazil.

So she made debut in Malayalam film 'Engane Oru Nila Pakshi' opposite Kunjako Boban in 2000. Even though this film failed at box office Snha was noticed by directors of Tamil and Telugu industries.

She immediately got offer in Susi Ganesan's 'Virumbigiren' released in 2001, where she acted opposite to Prashanth.  Then she acted in ‘Ennavale’ (2001) with Madhavan and this was her commercially hit film.

She worked in Lingusamy directed 'Aanandam' that was highly praised by the audience. She came in limelight with films such as 'PunnagaiDesam' and 'Pammal K Sambandam' (2002). 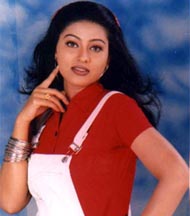 But her films 'Paarthale Paravasam', 'Yeh Nee Romba Azhaga Irrukey' and 'King' did not do well. Her fortunes turned around in the same year in 'April Maadhathil',  which was a super hit film.

Sneha grabbed two Filmfare Awards for Best Supporting Actress for her performances in Unnai Ninaithu (2002) and Autograph (2004). She was nominated thrice for Filmfare Best Actress Award.

She has also received the Tamil Nadu State Film Award for Best Actress twice; for Virumbugiren, Aanandham, Punnagai Desam in 2001 and for Pirivom Santhippom in 2008. She was honoured with a Nandi Award for her Telugu film Radha Gopalam (2005) and the Kalaimamani award in 2004.

Sneha is also involved in health promotion programs. In 2011, she promoted polio eradication programme organised by the Pondicherry Rotary Club.
On May 11, 2012, Sneha got married to her boy friend Prasanna.