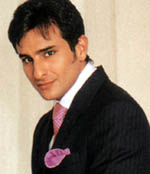 Saif Ali Khan belongs to the family of the Nawabs of Pataudi, Haryana. He is fondly called Chhote Nawab. His father Mansoor Ali Khan was Nawab of Pataudi, and a famous cricketer who captioned India.

He mother Sharmila Tagore, is the famous Bollywood heroine of 60s & 70s. Saif has two sisters, Saba and Soha. Soha also acts in films. Saif was born in New Delhi and attended the Lawrence School, Sanawar, and later the Locker�s Park Prep School to complete his basic education.

He completed his graduation from Winchester College, UK. Saif entered films in the year 1992 with movie Parampara. He also played a role in Aashiq Awara in 1993.

He did the lead role in Yeh Dillagi in 1994, a super hit film at the box office.

All these movies were super hit at the box office and Saif�s acting was praised by the audience. His movies such as; Rehna Hai Tere Dil Mein, Na Tum Jaano Na Hum, Hum Sath Sath Hain and Darna Mana Hai, were average films. 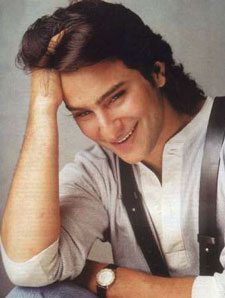 He got huge recognition through multi-starrer film, �Kal Ho Naa Ho� directed by Nikhil Advani. This film was commercially very successful and Saif became a megastar after that. His other successful movie was �Salaam Namaste� produced by Yash Chopra in 2005. Saif Ali Khan did a negative role in Omkara where he acted as a village don.

Government of India has honoured him with Padma Shri. Saif has a sporty and elegant personality. He has done many ad films and launched many brands. He has been the brand ambassador to several products.

Looking at his personal life, Saif Ali Khan was married to actress Amrita Singh and has a son, Ibrahim Ali Khan, and a daughter, Sara Ali Khan. Their relationship soured after thirteen years of marriage and couple divorced in 2004.

Saif married again in 2012 having Nikaah with actress Kareena Kapoor. The greatest quality of Saif Ali Khan is he has proved himself through the dint of his hard work. He never rested on his family laurels or backing to get recognition in film industry.